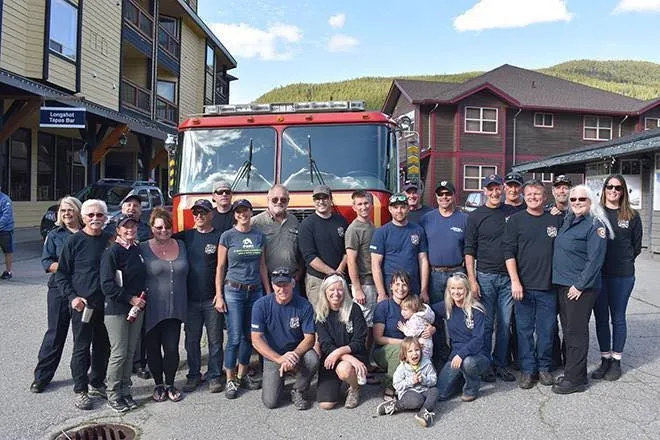 Fires in the Apex Mountain area will be no match for the local fire department after a B.C. celebrity donated a critical piece of equipment.

It was an eye-opening experience when Bryan Reid Sr., founder of Pioneer Log Homes and star of HGTV’s “Timber Kings” lived through the devastation of a forest fire near Williams Lake in 2017.

“This whole area was evacuated,” explained Reid, who stayed behind to protect his sites. Unfortunately, one went up in flames.

Spirits remained high and the passion was still there, even though, Reid said, the brigades lacked some of the most important tools and equipment.

“We’d go and visit the fire department in the evening, and you know, what was obvious was … they were all kind of under-tooled,” he said. “Most of them are volunteers. And they were passionate about they did, but they just lacked a few pieces of equipment.”

Reid purchased two fire trucks from the City of Abbotsford and donated them to the 150 Mile House Brigade, sparking what he called a “trickle effect.”

“Then 150 Mile House re-gifted their firetrucks to other fire departments. They all just kept helping along the way.”

And he didn’t stop there: Reid, who has a property in Keremeos, reached out to see if he could help that fire department, but was told Apex Mountain was in even greater need of assistance because it didn’t have a single truck.

Reid said the day he went to Apex to drop off the keys and paperwork for the truck he was greeted by the brigade.

“It was kind of humbling. I just went up to give them the keys … and I ended up staying there for a few hours and having coffee.”

Reid plans on continuing to keep an eye out for firefighting equipment for sale, doing it not “for the sake of doing it,” but because he wants to help.

The Apex Fire Brigade Society held an unveiling celebration for its new truck this past weekend.

Chief Gabe Lavoie said the truck will be instrumental in efficiently fighting fires. Without a fire truck, he explained, crews have to bring in equipment from different areas and each volunteer relies on other members to converge with everything needed.

“We had a very small fire in November, and had we had this fire truck, it carries 500 gallons of water, it would have had thousands of feet of hoses, and all the equipment right on it, so we could have pulled into the driveway and started fighting it within minutes,” said Lavoie.

Even with the donation of the truck, however, the fire brigade is still in need of equipment and is always fundraising and grateful for donations. Lavoie estimated the need at around $80,000.

“If we can find used equipment, it can be cheaper,” he explained. “But some equipment you can’t find used. Usually fire departments keep equipment until it can no longer be used.”

During the truck’s showing, Lavoie said, educational flyers were placed in each compartment of the truck outlining the equipment that will hopefully soon take its place.

“One company donated all of our fire ladders,” he said. “Another is donating all the medical equipment for the truck. We’re just trying to pull in as much help as we can.”

The Apex Fire Brigade Society has a GoFundMe page, which can be found at https://ca.gofundme.com/afbs-fire-brigade-fundraiser